In lieu of tickets, we are accepting donations to benefit the Ronald McDonald House Charities of Nashville and Alpha Delta Pi Foundation.

Donations accepted (cash/card) on site. Can't make it out ? You can support the cause by donating through clicking "Find Tickets" above or at this link - https://www.eventbrite.com/e/singer-songwriter-night-tickets-60669311544 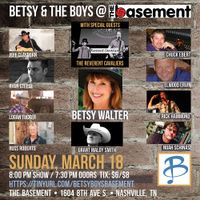 Betsy & The Boys at The Basement